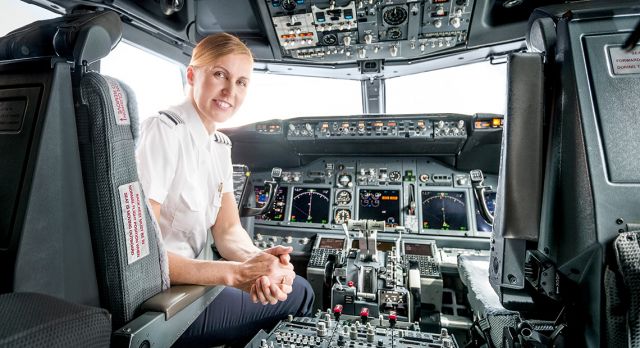 I once read an article in which a well-known female journalist admitted that women pilots make her nervous. She went on to say that, “Sometimes in life, it feels better to have a strong man in charge.” If you could see me now you would see fire coming out of my ears and other extremities! Like Macca jook me! Brute force is not a prerequisite to pilot a plane safely. It is cool, clear thinking and the ability to handle any situation in the air that is required, not muscles. There is nothing wrong with female pilots. I can vouch for them. Many years ago Iwent to Jamaica for my grandma’s funeral. I flew into Montego Bay via Tampa, at short notice, as there were no direct flights from London to Kingston. Then I had to take an internal flight from Montego Bay to Tinson Pen in Kingston.

The flight was terrible. Terrible! And to this day it remains my worst. And it was a man in the cockpit. With all the dipping and diving he was doing, I thought I was going to die. And me on my way to a funeral already! I was glad to land in Tinson Pen, I can tell you, wherever that was. I spent the whole week in Kingston fretting about going back that way to Montego Bay. If I’d had the means I would have gone by road. But instead, I had to fly back, and what a sweet experience that was. Sweet. Sweet. Everything about the flight was smooth and easy and when we ran into a little turbs, the person at the controls knew exactly what to do to give us a safe landing. That person was a woman. Bless her little cotton socks.

But here’s a thing that’s got people talking now. Can a man do any job a woman can? In recent years we have seen predominantly women’s roles like nannies, nursery workers and midwives welcome men with open arms. Though not a lot of women are in favour, for instance, of male midwives. Urging them to push harder, when they did not have a female body. So, what about a man becoming a matron of a boarding school? Paul Davies is one such man. He is a former firearms police officer and dog handler with a bravery award to boot. And he was recently appointed as matron at St Edwards’ School in Oxford. Boarding schools by their nature can be a hostile and unkind place. Kids living with kids that’s not blood. Kids weeping into their pillows in the dead of night, missing mom and dad and their usual home life.

In having a matron at boarding school, does the person in charge need deep-rooted maternal instincts particularly when it comes to looking after other people’s children? Up until Paul Davies, boarding school matrons have been women, and among other things, they oversee nursing and domestic arrangements. They could also do well with having the personality that is needed to look after younger children. Boarding schools’ matrons, of the female species, usually have to work a lot harder to develop badass authority to keep non-compliance kids in line. Or you can have a Paul Davies. So, if your young offspring was at boarding school, especially from a tender age, who would you want to be comforting them. A man or a woman? A matron or a mantron?