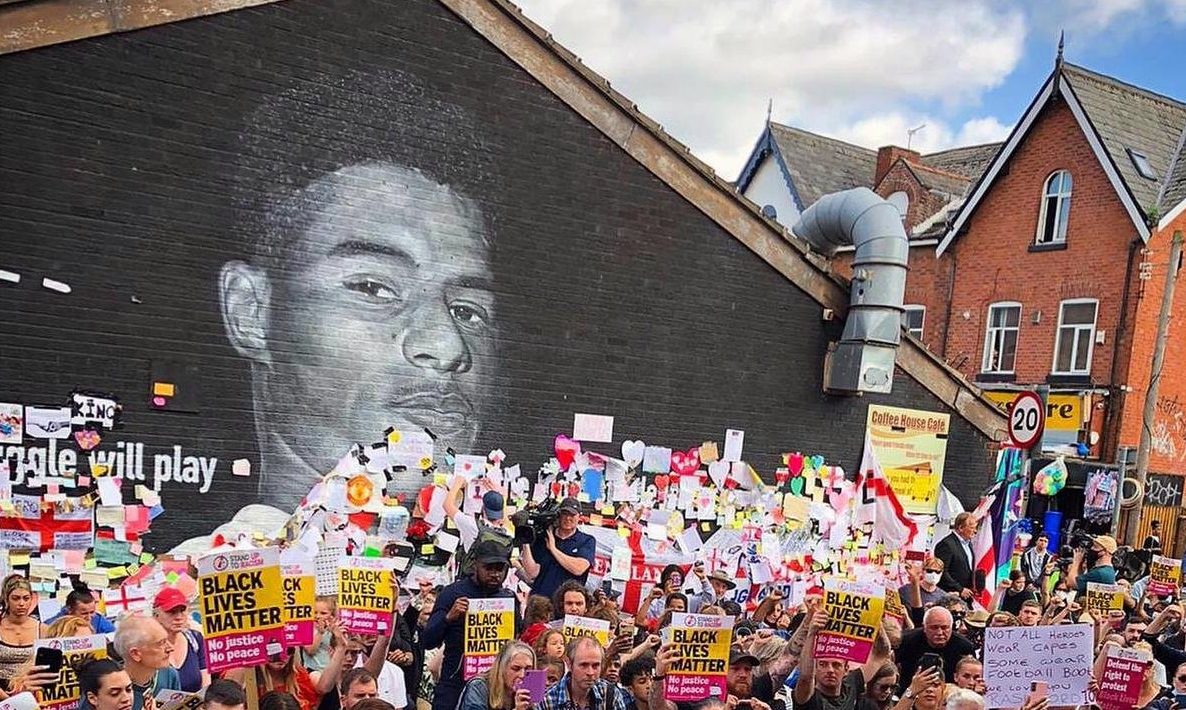 Oh, what a night! The Euros. The Final. The Team. The Lions. This England. The Pens. The Misses. The Heartache. The Tears. The Usual. But that was only half the story. The other half? Racism. Just as painful. Yes, folks, that nasty insidious enemy of the people made its presence felt in a heavy-duty and evil way.

In case you missed it, and how could you, allow me to enlighten. At the end of the final, final whistle with no outright winner, the game went into penalties. This is usually bad news for England. For both the team and the rest of us Englandites. But you know what, ‘do-do’ happens, and when it does, you deal with it. You clean it up and move on. In this scenario of ‘do-do happens’ three Black players, Marcus Rashford, Jadon Sancho and Bukayo Saka, were put forward to take the last three of the five penalties. And the worst possible thing that could have happened in that instant, happened. Lawd ‘ave mercy! They all missed. The balls (somehow) did not make it into the net. Shock! Horror! Tears…and the rest.

Now, the moment I saw that, I knew what was coming. And it did not disappoint. These three young lads (dubbed the Cubs) became the target for the vilest racist abuse from mindless bigoted idiots. Both online and off. And what gets me about this is some sort of do-gooder and their brand of crapology suggesting that these bigots need educating, not punishment. Really? Educating in what, I ask myself. And them. Racist abuse is an everyday occurrence for a lot of people of colour. It also rears its ugly head in football, with many Black players of time past speaking of their painful experiences in this regard.

Whilst more could be done, it is said good people have set up, put on, and delivered countless ‘race awareness education’ courses for years. Even though I do not see why you need to teach people who hate other people who look racially different from them that that is unacceptable and wrong. Even a two-year-old would know that. But still…if the powers that be say that people need educating in racism and racial abuse, well…. So, after years of this ‘education’, who now has the time and resources to be setting up, putting on and delivering more ‘education’? I think we have passed the education point now. Forget that! Let’s get serious. Let’s inflict the severest legal penalty, as the law allows, on those who cause pain and suffering through their racial abuse. As a society we do not stand for abuse in any other sphere, so why do we continue to allow this form of criminality free reign in the ‘beautiful game’?

Marcus, Jadon and Bukayo did not deliberately miss the penalty. I can assure you, peeps, that more than anything in the world they would have wanted the ball to blast that net. And while I am on the subject, have any of you racist imbeciles ever been picked to play for the England team? Just asking.

Photo (c) Dunk on Flickr under the Creative Commons Attribution 2.0 Generic (CC BY 2.0)